Is the Art Market Ready to Embrace Work Made by Artificial Intelligence? Christie’s Will Test the Waters This Fall

The auction house is selling an AI-produced work of art for the first time this fall. 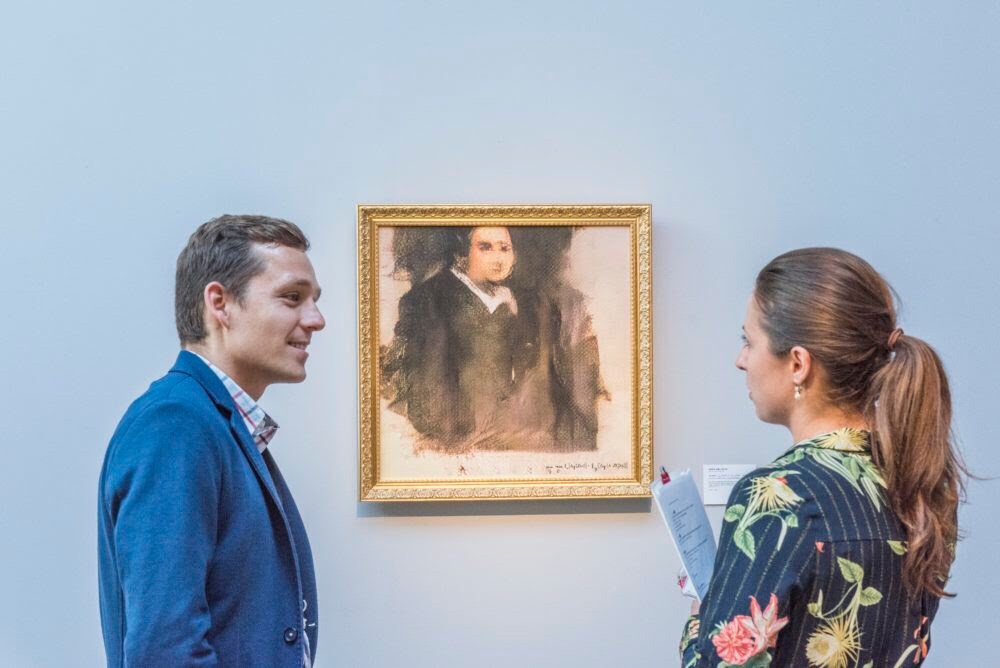 Christie’s New York will make history this fall when it becomes the first auction house to sell a work of art made by artificial intelligence. The print on canvas, a product of an algorithm developed by the French art collective Obvious, will be included in the auction house’s prints and multiples sale October 23-25.

Hugo Caselles-Dupré, a member of the Paris-based collective, told artnet News that they were “interested in the philosophical approach behind this,” he said. “Can an algorithm be creative? If so, this algorithm is the closest to the human mind’s creativity.”

The work was created using a model called a Generative Adversarial Network. The artists first fed a generator a dataset of 15,000 portraits done between the 14th and 20th centuries. It then created new works based on the training set until it was able to fool a test designed to distinguish whether an image was made by human or machine.

The resulting work, titled Portrait of Edmond de Belamy, depicts a man in a dark coat and white collar with indecipherable facial features that reside somewhere in the uncanny valley. The unique piece, a gold-framed canvas print that is currently on view in Christie’s London showroom, is estimated at $7,000-10,000. The collective says it will use the proceeds from the sale to further train its algorithm, finance the computational power needed to make such works, and experiment with 3D modeling. 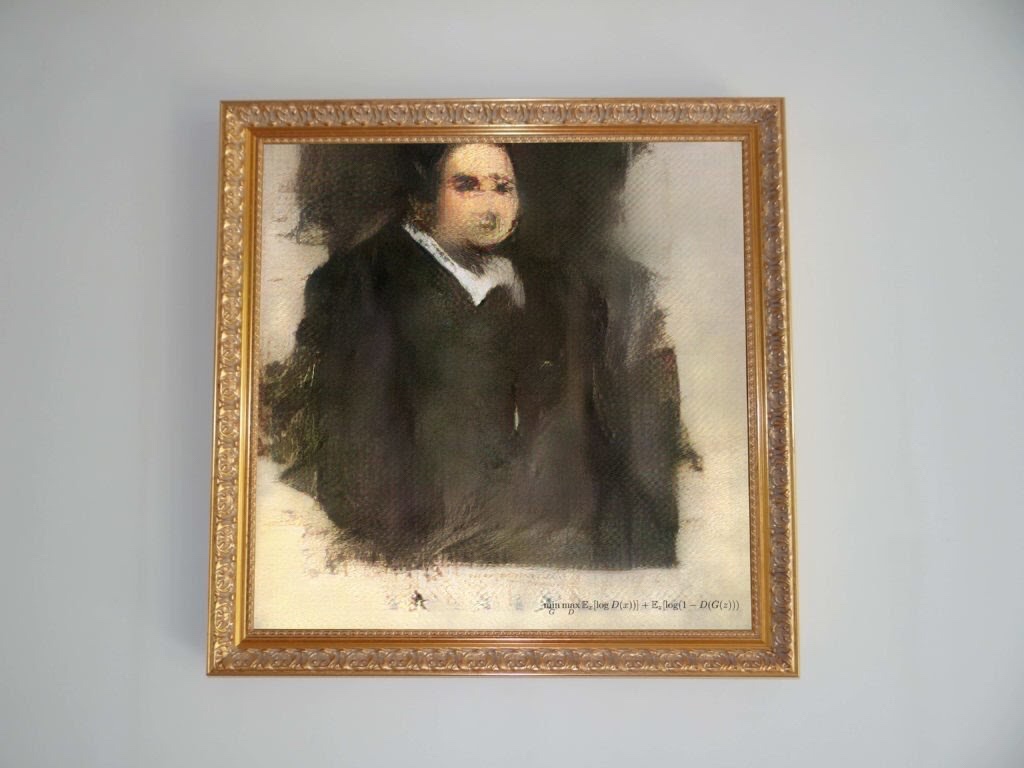 The Christie’s sale constitutes an important validation in the realm of AI art. Although there are many so-called “creative coders” who use similar technologies to improve web experience, few are considered contemporary artists. The members of Obvious see themselves as conceptual artists whose main goal is to democratize Generative Adversarial Networks and legitimize AI-produced art.

“We wanted to propose this new approach to a more traditional market rather than the tech area,” Caselles-Dupré said. “At the beginning it was difficult to be understood by the traditional art market because they were looking at us like, ‘Who are those guys? What is this new weird stuff?’ But the more we’ve explained what we’re doing, what we want to share, and what we want to say, the more the art world is paying attention to our work.”

Following the Christie’s sale, Obvious plans to work with brands and galleries to expand the movement. “We really believe that AI can be a new tool for art,” Caselles-Dupré said. “In 1850, when the camera showed up, it was only used by highly qualified engineers and so it was not considered for its artistic potential. We think we are in the same situation, because people view us as engineers but we really think this type of technology will be used more and more in art.” 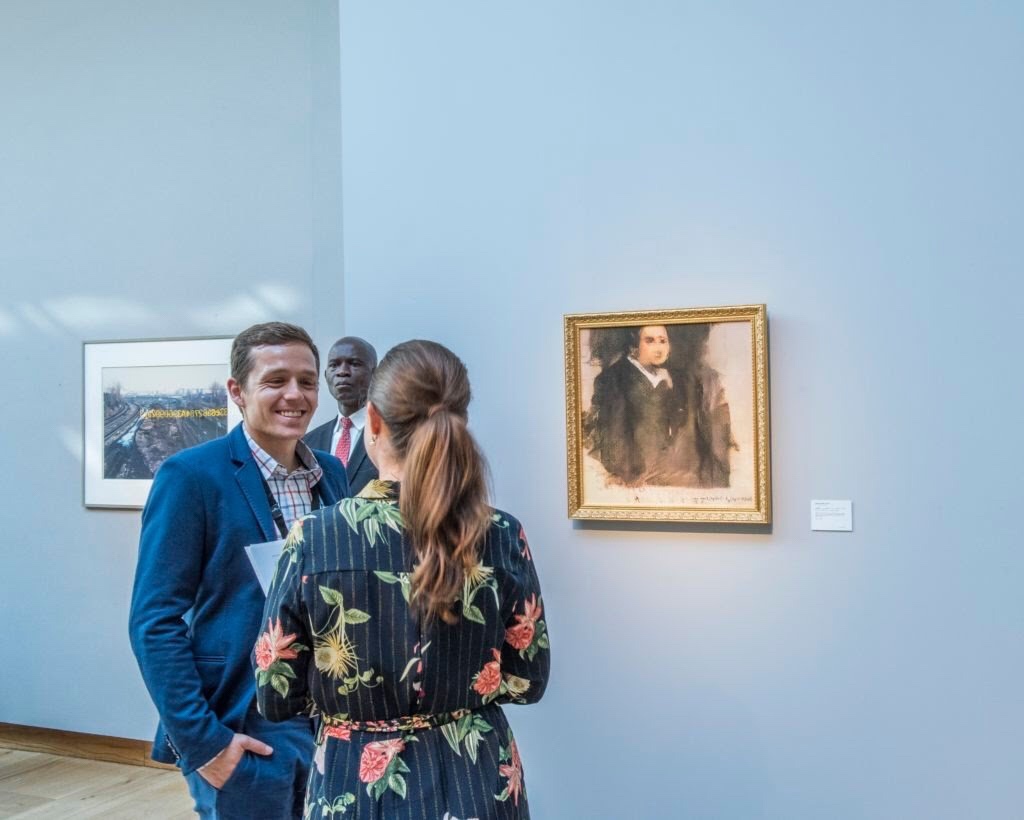 The collective began a conversation with Christie’s following a London symposium on the implications of blockchain for the art world. “Christie’s continually stays attuned to changes in the art market and how technology can impact the creation and consumption of art,” said the auction house’s head of prints and multiples, Richard Lloyd, in a statement. “AI has already been incorporated as a tool by contemporary artists and as this technology further develops, we are excited to participate in these continued conversations.”

Edmond de Belamy is one of 11 portraits of the fictional Belamy family, which is named after Ian Goodfellow, the AI researcher who invented the Generative Adversarial Network method in 2014. (“Goodfellow” roughly translates to the French bel ami.) Another portrait from the family, Le Comte de Belamy, sold to Parisian collector Nicolas Laugero-Lassere earlier this year.

Originally published on the artnet News

***All rights to artwork remain with the artist and can be removed from the website on request at any time. Please, contact us by email