Gabo studied medicine and natural science, then philosophy and art history, at the University of Munich in Germany; he also took engineering classes at the Technical University in Munich. In 1913 he walked from Munich to Florence and Venice, viewing many works of art and architecture along the way. Early in his life he changed his name to Gabo in order to distinguish himself from his brother Antoine Pevsner, a painter.

While visiting Pevsner in Paris in 1913–14, Gabo met the artist Alexander Archipenko and others involved with the avant-garde. During World War I he lived with Pevsner in Oslo, Norway. There, Gabo produced his first Cubist-influenced figurative sculptures, exemplified by Constructed Head No. 2 (1916), which he executed in celluloid and metal. The brothers also began to experiment along the Constructivist lines laid down by their fellow Russian Vladimir Tatlin. Constructivist sculpture as practiced by Tatlin had definite political implications, but Gabo was more interested in its use of modern technology and industrial materials.

Returning to Russia after the Revolution, Gabo and Pevsner saw political forces redirect Russian art from exploration to propaganda. In 1920 the two brothers issued the Realistic Manifesto of Constructivism, which they posted and distributed in the streets of Moscow. In it they asserted that art had a value and function independent of the state, and that geometric principles should be the basis for sculpture. They advocated the use of transparent materials to define volumes of empty space instead of solid mass. In 1920 Gabo produced Kinetic Composition, a motor-driven sculpture that demonstrated his principles by incorporating elements of space and time.

Gabo left Russia in 1922 and lived for 10 years in Berlin, where he worked with László Moholy-Nagy and other artists of the Bauhaus. During the 1920s Gabo continued to create monumental constructions out of glass, metal, and plastic. In 1932 he went to Paris, where he joined the Abstraction-Création group, an association of artists that advocated pure abstraction. He lived in England from 1936 to 1946, promoting Constructivism there by editing the collective manifesto Circle in 1937 with the abstract painter Ben Nicholson. Curves replaced angles in Gabo’s new spatial constructions made of taut wire and plastic thread. He moved to the United States in 1946, and in 1953–54 he taught at the Harvard Graduate School of Architecture. During the 1950s Gabo received several commissions for public sculptures, only some of which he completed, such as the large commemorative monument for the Bijenkorf department store (1954, unveiled in 1957) in Rotterdam, Netherlands. 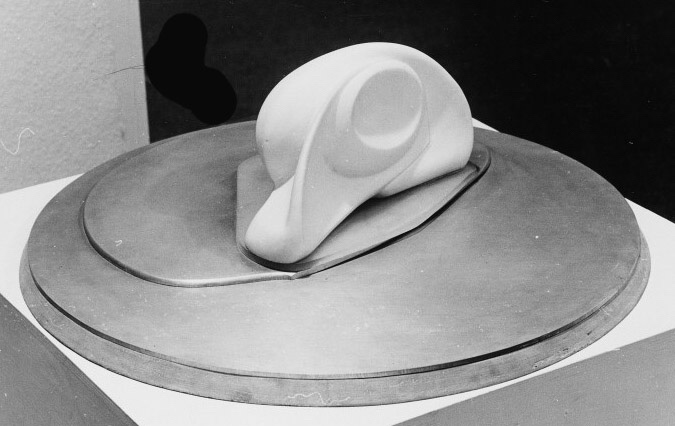 ***All rights to the artwork or any material remain with the author and can be removed from the website on request at any time. Please, contact us by email